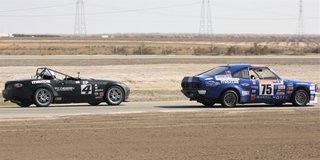 Fender Fun: A couple tight races developed Sunday within classes for cars with fenders. In E Production (EP), Glen McCready and his Mazda MX-5 held the lead over Saturday winner Aaron Downey for the first part of the race. But just past the halfway point, Downey got by McCready. However, the excitement was in no way over. McCready hounded Downey lap after lap, looking as if he could regain the lead at some point. But in the end, Downey repeated as the EP winner in his No. 75 G-Loc Brakes/Goodyear Tires/Wankelworks Mazda RX-3 racecar.

“That’s probably the best racing I’ve done in 17 or 18 years,” Downey said Sunday on the victory podium. “Glen got a good lead just after the start of the race. I just chased him for a little bit. There were a couple opportunities he gave me … and I was able to take advantage of one. Then I kind of stayed out front from there.”

B-Spec competitors Chris Taylor and Thomas Lepper were also embroiled in a great battle Sunday. Both piloting Mazda 2s, it was Lepper who first took the lead, but Saturday winner Taylor assumed the top position four laps in driving the No. 9 Harris Hill Raceway/G-Loc Brakes/Chris Taylor Racing Services/Winding Road Racing/Hankook car. Lepper, however, wasn’t done and regained the lead in his No. 6 T.O.A.S.T. B-Spec car with about five laps left. He then held off Taylor’s challenges for the remaining trips around the circuit and brought home a win in B-Spec.

“We had a great race,” Lepper said afterwards. “Chris is new to me, so I had to learn about him. Once he started slipping his tires over at the ‘Off Ramp’ turn, I knew I had him.”

Two chaps in Touring 4 (T4) also gave onlookers a thrill Sunday. Izzy Sanchez, Saturday’s winner who drives the No. 68 Hoosier Tires/Carbotech Brakes Toyota FRS, led most of the race Sunday. But filling Sanchez’ mirrors the entire time was Nick Leverone and his No. 115 Flatout Motorsport Mazda Miata. Near the race’s end, Sanchez encountered a problem and spun off the circuit, leaving the path clear for Leverone to claim victory.

“Izzy was real quick all weekend. There was no way I was going to get to him unless something big happened,” Leverone admitted after Sunday’s race. “Unfortunately for him, on the last lap, it happened.

“It was a great race the whole time,” Leverone continued. “We had a bunch of close racing between him and I and a couple of the STU cars. It was a blast. We had a real good race.”

Entertaining Enterprises: After an eventful, wet Formula Enterprises 2 (FE2) race Saturday, FE2 took the track Sunday under clear, blue skies. The substantially different conditions allowed Brandon Aleckson, in the No. 33 Dan's Upholstery/OP Consulting Formula Enterprises/Mazda, to secure the lead from the very beginning. Saturday winner TJ Acker, however, applied pressure to Aleckson the entire way. Lap after lap, Acker looked for a way around Aleckson. But it was not to be as Aleckson held Acker at bay, even while navigating traffic, to bring home a win Sunday.

“To be honest, man, I was just holding on for dear life,” Aleckson said after the race. “Running this counterclockwise configuration makes it hard to pass. I knew TJ was eating me alive down in the backside of the track. I just ran low, kept him behind me and I knew in the fast stuff I could gap TJ enough to stay ahead of him. So, I just held on for 17 laps and here we are.”

Four-peat: One SCCA road racing competitor departed Buttonwillow Raceway Park on Sunday with more Hoosier Super Tour trophies than any other. That driver was Michael Lewis, who managed to win four races, over two classes, in two days.

The GT-1 class victory went both days to Lewis, running the No. 12 Goodyear Jaguar XKR. He also swept the GT-3 class, which was unique this weekend at Buttonwillow as it represented the GT-3 Challenge presented by MPI opening round for this year.

The GT-3 Challenge is a series boosting participation in the GT-3 class and supported by Mazda, Max Papis Innovations, Penske Racing Shocks, AiM Sports and Hoosier Racing Tire, with new partners Goodyear Tire, Carbotech Performance Brakes and Bell Racing Helmets jumping aboard this year. There are five scheduled GT-3 Challenge rounds in 2020 -- the others taking place at Hoosier Super Tour events at Michelin Raceway Road Atlanta and Watkins Glen International, as well as Road America in July, and finally SCCA’s National Championship Runoffs® in October. Thanks to his dominant performance this weekend in the No. 32 Goodyear Mazda RX-7, Lewis is now the West Coast representative for that final GT-3 Challenge event.

Sweeping Buttonwillow: Several drivers also managed to sweep both Saturday and Sunday races at Buttonwillow Raceway Park in their respective classes. For starters, Carl Young swept Super Touring® Under (STU) in the No. 24 El Dorado Motorsports Honda CRX, but not without some heavy pressure at times from fellow STU racer Dominic Starkweather in a Scion FRS.

After a scrappy performance Saturday to claim the Super Touring® Lite (STL) victory, Nathan Pope showed dominance Sunday as he stormed away for a second STL win in his No. 42 El Dorado Motorsports Honda Prelude.