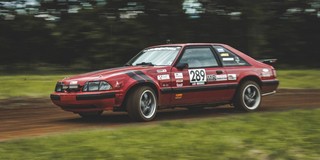 The first step on the path to the 2020 DirtFish SCCA RallyCross® Nationals will be taken this weekend as competitors from across the country flock to the Ross County Fairgrounds in Chillicothe, OH for the 2020 DirtFish SCCA RallyCross National Tour Great Lakes Challenge. This event should serve as a great preview for who will be the favored to win National Championships at Road America in August. Last year, washout conditions forced the event to be cut short after just one day of competition. With a full field of cars and a plethora of former national champs filling the entry list, everyone will be hoping for fairer skies.

One of the best battles to watch this weekend should be in Modified Rear Wheel Drive, where 2019 National Champion Brianne Corn will be going head to head with another former national champ, John W. England. Prepared Front Wheel Drive should be another tight battle with one of the largest entry counts and a field comprised of three former national champions. The finishing order for this class is anyone’s guess. Three-time champ Leon Drake will be representing the southern states in his Honda “C-R/X”, while five-time champion Warren Elliot will be carrying the torch for the New England region in His Mini Cooper S. 2017 Stock Front national champ Matt Wolfe is also in the field, along with a gaggle of cars from the Detroit Region.

Modified Front Wheel Drive is also an impressive field for this event. Multi-time champ and Ohio Valley Region’s own ZB Lorenc is leaving his all-wheel drive car at home and hopping in his Volkswagen GTI for this event. Also in the field is Washington D.C. Region’s resident ringer Andy Thomas, who had a decisive win in MF at this event last year. Other notables on the entry list this weekend include the 2019 Stock All Wheel Drive national champ Josh Armantrout in a Ford Focus RS and longtime Stock Front Wheel Drive frontrunner Chang Ho Kim in his trusty Acura Integra Type R.

Though Ohio’s stay-at-home order expired back in May, the hosting region is still taking plenty of precautions to help make competitors feel at ease while on site. “We have room for camping for everybody”, said event registrar John England. “We are renting a 5000 square foot open air shelter if you want to have a socially distant dinner there Friday night. There will also be a food vendor on site with breakfast, lunch and dinner options.”

The event kicks off on Friday, June 26 with tech and registration opening at 4 pm. The course will be open for walking at 6 pm followed by a run order drawing at 7 pm. Class inspection will take place the following morning at 8 am with the first car off slated for at 9:30 am. Online registration closes Wednesday, June 24, at 11:50 pm EDT.

As SCCA’s most widespread and readily accessible form of extreme motorsport, RallyCross is a scaled-down version of a rally stage laid out on a non-paved plot of land where the course is delineated by traffic cones instead of trees or rocks. Participation requirements are considerably less than those associated with other forms of performance rally, so drivers usually only need a mechanically sound, hardtop vehicle and a helmet to come play in the dirt.