SCCA National Convention: Something for Everyone 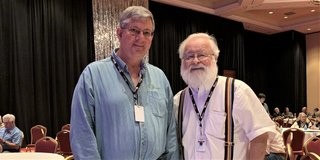 The annual SCCA® National Convention is well underway at South Point Hotel and Casino in Las Vegas with valuable information being offered by no less than 90 presenters during more than 100 seminars over four days. The 450+ attendees taking part in SCCA National Convention come from 72 of SCCA’s 115 regions and represent the width and breadth of SCCA activities and experiences.

David Ferris, who just joined Sports Car Club of America® five years ago, is attending only his second SCCA National Convention this year. A member of the Western Michigan Region, Ferris joined the Club to participate in a Track Night in America Driven by Tire Rack event with his son. Since then, he has jumped into Club activities with both feet, now serving as the Region’s Treasurer and Timing & Scoring Chief.

“This has been pretty interesting,” Ferris said of this year’s SCCA National Convention. “The number one reason I come to Convention is I’m ‘wet behind the ears.’ I really didn’t even know SCCA existed, to be honest, until 2015. I know there is a ton of stuff I need to learn.”

On the other end of the spectrum is Duane Rost, an SCCA member of more than 55 years from the Des Moines Valley Region. He has been attending SCCA National Convention since the 1970s and only missed a couple of the confabs during that time, stating that the gathering is a great way to meet new people, connect with old friends, and expand your horizons.

“The classroom sessions have certainly evolved over the years,” Rost noted. “The morning presentation made this year by Chris Robbins (It All Starts with Respect) is the single best presentation I’ve had at a Convention, ever. There was more information, more useful help for Club members in that one presentation than any I’ve had over the years -- and that’s several years.”

Coming from someone like Rost, that’s certainly high praise for Robbins, who is SCCA’s Region Development Director.

The 2020 SCCA National Convention grand finale takes place this evening, Jan. 18, with the SCCA Hall of Fame and Awards banquet. However, the learning continues Sunday with a special Tire Rack Street Survival Summit.

Photo: David Ferris (left) and Duane Rost (right) have different histories with SCCA National Convention, but both are thrilled to be at the confab.