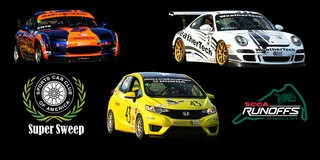 TOPEKA, Kan. (Oct. 28, 2019) -- The SCCA® Road Racing Super Sweep is the most challenging award a Club racer can achieve. To earn the award in 2019 a driver had to, in a single class, win a U.S. Majors Tour® Conference Championship, a Hoosier Racing Tire SCCA Super Tour Points Championship, and the National Championship Runoffs race at VIRginia International Raceway (VIR). A handful of drivers were in the hunt to claim a Super Sweep title this year, but only three left the Runoffs at VIR having earned the coveted award -- the first Super Sweep for each racer.

Cooper MacNeil, from Hinsdale, Illinois, earned the Super Sweep in Touring 2 (T2) after a dominate win in his No. 3 WeatherTech Porsche 911 at the 56th annual Runoffs. MacNeil began his journey to a Super Sweep by claiming the Southeast Conference’s T2 championship by only nine points over the Chevrolet Corvette C5 Z06 of John Logiudice. In the Hoosier Racing Tire SCCA Super Tour Points Championship, MacNeil walked away with the T2 title on the strength of six wins obtained through weekend sweeps at Sebring International Raceway, VIR and Circuit of the Americas, along with the Runoffs victory.

John Phillips, of Sealy, Texas, earned his first Super Sweep title in a B-Spec car new to him. Only a month before the National Championship, Phillips purchased his competition vehicle, the No. 43 Hoosier/PRP/HPD//KTuner/G-Loc Honda Fit, from friend and fellow competitor David Daughtery. During the 15-lap Runoffs race on VIR’s 3.27-mile circuit, Phillips and Daughtery worked together to pull away from the rest of the 25-car field. With only a couple laps remaining, Daughtery fell off the pace and Phillips stormed on to his first National Championship in 29 attempts.

Prior to the Runoffs, Phillips drove to a B-Spec championship in the Southern Conference, claiming eight wins in eight races. He also claimed the B-Spec Hoosier Super Tour Points Championship based on a total of seven wins coming at Sebring International Raceway, Circuit of the Americas and Hallett Motor Racing Circuit, along with his Runoffs victory.

Things looked dodgy momentarily at the Runoffs for Super Touring® Lite (STL) driver Danny Steyn, of Fort Lauderdale, Florida, after he slid his No. 9 Nelson/OPM/G-Loc Brakes Mazda MX-5 into the dirt with only a handful of laps remaining in the race. However, Steyn held the lead and brought home both the National Championship and Super Sweep title. His hard work earlier in the year produced an STL championship in the Southeast Conference after claiming five combined wins on the season at Sebring International Raceway, VIR and Michelin Raceway Road Atlanta -- which were Hoosier Super Tour weekends contained within the Southeast Conference schedule. Steyn then earned the Hoosier Super Tour Points Championship in STL by tacking on a win at Circuit of the Americas and, of course, the Runoffs victory.

Congratulations to each of these drivers on the incredible season, masterful performance and tremendous accomplishment.

The Sports Car Club of America®, Inc., founded in 1944, is a 67,500-member motorsports organization that incorporates all facets of autocross, rally and road racing at both Club and professional levels. With headquarters in Topeka, Kansas, the SCCA annually sanctions over 2,000 events through its 115 Regions and subsidiary divisions. Much of the SCCA’s activities are made possible with support from the following Official Partners: Hagerty, the Official Insurance Partner of SCCA; Hawk Performance, the Official Brake Products of SCCA; Sunoco, the Official Fuel of SCCA; and Tire Rack, the Official Tire Retailer of SCCA. To learn more, please visit www.scca.com.