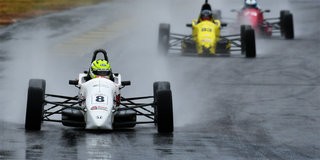 ALTON, Va. (October 13, 2019) – Jonathan Kotyk, from Oviedo, Florida, defended his 2018 SCCA Championship Runoffs® win by taking the 2019 title in a rain-soaked and shortened Formula F (FF) race at the wheel of his No. 8 K-Hill Mygale Honda.

Kotyk battled with Tyler O’Connor for much of the race and with two laps to go made a move on O’Connor entering turn one. O’Connor, in his No. Team Pelfrey/Bell Helmets/Honda Mygale, slid off track, giving Kotyk clear sailing to the finish.

“I pretty much had to take it easy the first couple of laps because I’d never been around here in the wet,” said Kotyk, who broke away with O’Connor before he lost the lead going into the Roller Coaster set of corners. “He was able to get around me and then I kept in his mirrors and pressured him until the last lap.”

The race ended with decisive moments on track, but it started less so. Rain started on the pace lap and race officials made the decision to declare a “wet race” and allow the field to come in and change to the Hoosier-spec rain tires if they desired. While in the pits, many drivers made the decision to also change suspension settings – an action frowned upon in the rules. Drivers who did change were penalized by being put behind those who didn’t.

Among the drivers who did make a change was Tire Rack Pole Award winner and eventual second-place finisher O’Connor. A sway-bar change relegated him from fourth to sixth place, but a spectacular start which saw him climb all the way into second place in the first three corners negated the disadvantage.

“We restarted about sixth and were able to make up a bunch of spots going into one,” said O’Connor. “I was side by side for second on the exit of one and by the time we hit turn four I was in second.”

From there O’Connor stayed in Kotyk’s tire tracks, trying to learn.

“He got a little wheelspin off of Oak Tree and I got a run, then filled my mirrors and waited for me to make a mistake and, unfortunately, I made a dumb one on the last lap into one,” O’Connor said.

While the lead battle separated in turn one on the last lap, the battle for third heated up between Derek Ketchie, Robert Perona and David Livingston Jr.

Ketchie, from Charlotte, North Carolina and driving one of three Ford-powered cars in a class filled with Hondas, worked from fifth to fourth with two laps to go and after heavy dicing in Roller Coaster and Hog Pen, came down the front straight in his No. 15 Van Diemen with the final podium spot.

For Ketchie, the only podium-finishing driver not running a pro-team prepared car, it felt great to get to move so far up from his eighth place starting spot and win the Sunoco Hard Charger Award.

“Honestly we tried to make as few mistakes as possible and everybody else was making them,” said Ketchie. “It feels great.”