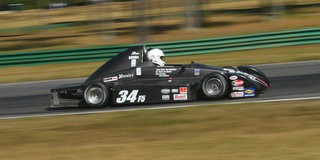 ALTON, Va. (October 11, 2019) – Clint McMahan, of Covington, Georgia, drove away from the Formula 500 field on Friday at VIRginia International Raceway (VIR) on his way to a 30.163-second SCCA National Championship Runoffs victory and a second career title. Calvin Stewart, of Novi, Michigan, and Eric McRee, of Lapeer, Michigan, finished on the podium after swapping positions twice in the last lap.

“Coming from the Road to Indy in 2016, I learned what competition really was,” McMahan said. “Those guys refer to it as ‘inch perfect.’ My first experience with my engineer there, he slammed his hand on the table and told me I was six inches off the apex. I thought, hey, that’s pretty good. He slammed his hand down and repeated himself and I realized he was not nearly as enthusiastic about it as I was. So you learn to be inch perfect every time. You have to capitalize anywhere that you can.”

Stewart started second in his No. 07 SabbathTruth.com/Hoosier Novakar Blade F600/Suzuki as McMahan pulled away from the field. His pressure came from McRee, who hounded Stewart step for step for the final six laps of the race. McRee’s No. 46 John E. Green/Fastrack Motorsports Novakar J10/Suzuki moved around Stewart going into the ‘rollercoaster’ complex of Turns 14 and 15 coming to the white flag signaling one lap to go. Stewart stayed in the draft and was on the brakes hard into Turn Two, moving back in front and holding off Mcree on the final circuit.

The podium is the third of Stewart’s Runoffs career.

“It was a tough race,” Stewart said. “We had a rough week, this was the third motor that we put in and number three wasn’t as good as one or two. All in all, we had a little bit more on the top end, and Eric had me in a lot of the low speed, especially at the end. I saw him coming and knew if I didn’t get by then, it wasn’t going to happen.”

“We had a good battle going,” McRee said. “We were pretty much matched on pace for the longest time, then he got a little gap. I guess his tires started going away a little bit toward the end and it was like a dog chasing a rabbit. I was going after him. I had a legitimate chance to get him again on the last lap, but unfortunately a lapped car got in between us in the esses and that was the gap he needed.”

Aaron Ellis moved around David Lapham on the final lap to take fourth, with Lapham crossing the stripe in fifth. Tim Friest earned the Sunoco Hard Charger award, improving four positions from his place on the grid to finish 11th.

Live, online video coverage of Runoffs races, presented by Mazda, is available throughout the three days of competition at SCCA.com/live. An audio race call, supplied by the Super Tour Radio presented by Hoosier Racing Tire broadcast team, is also available at www.SCCA.com/live, as well as live timing and scoring for each National Championship race.